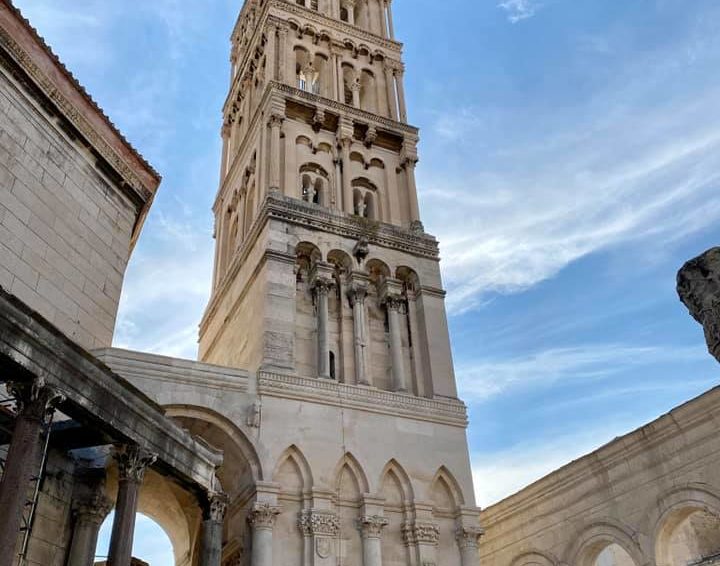 Welcome to the beautiful city of Split, Croatia. This was the next stop on my journey traveling the world during a global pandemic. Split is the second-largest city in the country of Croatia, and it sits on the Adriatic Sea. As you drive through Split, you will see a lot of rice fields, scenic mountains, and a beautiful coastline. This is such a fun town to explore, and I would highly recommend stopping here if you’re planning to travel through Croatia.

Split is a huge city. It’s very urban and feels very much alive. The city has a lot of traffic and there’s always some kind of event happening. You will never be bored in this city! The majority of Croatian people are very friendly. We didn’t have any issues with them at all. Most of the Croatians we encountered spoke English, but I would say about 30% of them spoke Croatian or other languages.

The most popular way to explore this area is by foot. A lot of the restaurants and shops are located in little, narrow alleys. Some are even located in castle walls that you aren’t allowed to drive through. Choosing to walk allows you to discover a lot of gems, though, such as the Diocletian’s Palace.

Split also sits on the coast, so there are a lot of beautiful beaches you to visit there. One of the most famous beaches in Split is Bacvice Beach, which is absolutely beautiful. The amazing weather combined with the soft sand and crystal blue water makes for the perfect vacation getaway. You could also check out the Riva, which is a fun boardwalk with coffee shops, restaurants, and stores. There are also a lot of people on the promenade that sell tickets for boat rides and tourist excursions. I often had to pinch myself to make sure I wasn’t dreaming while we were in Croatia. It was that beautiful!

Split is over 1700 years old and has a lot of old-world history. This place is especially beautiful because it’s situated right on the Mediterranean Sea. The city’s biggest claim to fame is the Diocletian’s Palace. It’s the ruins of an ancient Roman palace built for the Roman emperor, Diocletian. When it was first built in 305 AD, half of the palace was for the Emperor’s personal use, and the other half was used for the military. The perimeter of the site occupies around 30,000 square meters.

Currently, the ruins are the heart of the city. You can see the amazing World Heritage Site pictured below. If you are a Game of Thrones fan, you may recognize the Palace because they filmed there in season four. The catacombs underneath the Palace is where Daenerys locked up her dragons after receiving complaints from the villagers. There is even a Game of Thrones museum located within the city. Its museum contains famous cast props, costumes, and memorabilia.

There were multiple entrances to the Palace, but only one is still currently in use. It’s the same entrance that was once used for the military. Also, one of the entrances is only accessible by sea and boat. A major attraction at the palace is visiting the famous Cathedral of St. Domnius, where you can take a tour. Visiting the palace was an awesome experience. It was really cool not only to learn about the history of the palace but also to experience it firsthand.

My favorite parts of Croatia were definitely Dubrovnik, Split, and Zadar. However, the entire country is beautiful. Croatia was the first place we started dealing with COVID checkpoints though. There were checkpoints at the entrance of most of the cities. At each checkpoint, the cops wanted to know where we had been and where we were going. Most of the time we were waved through once they found out we were tourists. There were only a few times it took a little longer to get through. I’m going to be honest, the food in Croatia was just okay. Most of it was very Greek-influenced, like Mediterranean food. So you would definitely thrive here if you like Greek food. Honestly, anything is better than UK food!

Overall, I was very impressed with Split. It was such a fascinating city, with a lot to see and do. I would recommend this town to anyone no matter their age, shape, or size. I will say that the main mode of transportation is by foot, so keep that in mind. There was a lot of walking, but it was more than worth it because we got to find the hidden buildings with amazing history and architecture. I would absolutely give the city a 10/10. Keep following along to discover more cities, cultures, and history. I hope you’re making a travel list of your own. Until next time, Mark signing off.