The Christ of Mercy Statue in Nicaragua 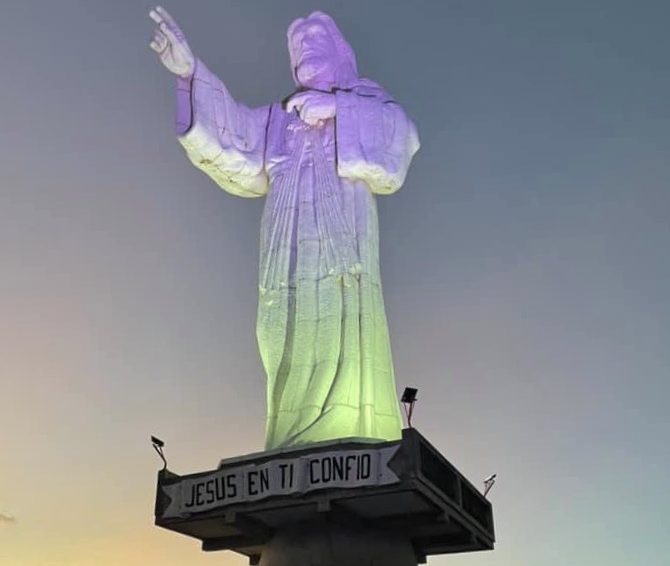 While traveling through Nicaragua, we visited the eighty-foot statue of Christ looking over the city of San Juan del Sur called the Christ of Mercy. To get to the statue, we had to hike up a steep hill, all the way to the top. This adventure consisted of rigorous exercise because it was straight uphill, but the view of the city was worth it!

History of the Statue

The statue was built in 2009 by a rich Nicaraguan man, Erwin González, who defeated cancer and wanted to do something to show his faith. The structure was built by a Costa Rican sculptor and architect named Max Ulloa Rayo. The statue took two years to complete from start to finish. So, two huge vans were needed to move the pieces, and the actual assembly of the statue took six months to put together. The challenge came from trying to work against strong winds. However, they were able to build the Christ of Mercy, and it stands tall today as one of the most popular sites in San Juan del Sur.

The Christ of Mercy

The statue is located high above the northernmost seawall in the bay. This amazing structure is made up of 195 different pieces. The Christ of Mercy measures 15 meters high and sits on a 9-meter pedestal, with a total reach of 24 meters. Interestingly enough, this statue is the 11th largest image of Jesus in the world. Also, it weighs four and a half tons, which is crazy! It stands at a height of 134 meters above sea level and can be seen from almost anywhere in the city. Even President Jimmy Carter has gone up there, which is pretty cool. The Christ of mercy has a small chapel at the base. Here you can find a lot of information on the statue, such as when it was built and why.

This is considered to be one of the most amazing views in San Juan del Sur. And, let me tell you, it was! The difficult hike to the top was so worth it once I was able to gaze out to the beautiful, panoramic view of the city. I would highly recommend this beautiful monument if you’re visiting this area.

In conclusion, thank you for joining me on this wild ride. We have had such an amazing time exploring Nicaragua. The country, people, and culture are so beautiful. I love sharing all my adventures with you.