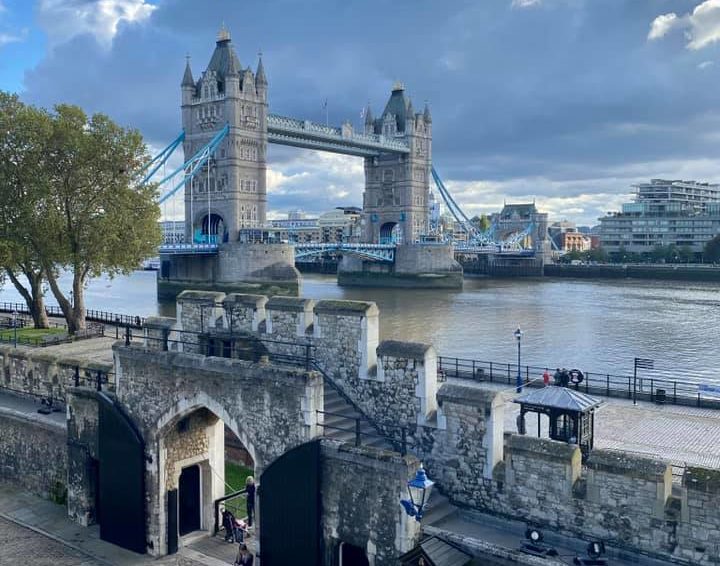 He everyone, welcome back! Thanks for following along with me on all of my adventures. Our next stop is in the metropolitan area in London, England. We had the chance to see the Tower Bridge, which was such a cool experience. The bridge was built between 1886 and 1894, and to this day is known to be one of London’s most defining landmarks.

London’s famous Tower Bridge is huge! Many people mistake it with the London Bridge. The bridges are located very close to each other, so it’s easy to do. The Tower Bridge was built in 1886 and is about 213 feet tall. It’s located right next to the Tower of London where the crown jewels are kept. Also, it’s is the same fortress that was formerly an infamous prison.

When it was built, it was the largest bascule bridge ever completed. If you didn’t know, a bascule bridge is a moveable bridge that provides clearance for boat traffic. The bascules were once operated by using steam to power the engines. Today, the bascules are driven and operated by oil and electricity rather than steam. The original pumping engines, accumulators, and boilers are now on display within Tower Bridge’s engine rooms.

When the City of London Corporation was originally making plans for the Tower Bridge, they struggled to create a design they could build downstream without disrupting the river. To generate ideas, they formed the Special Bridge Committee in 1876 and launched a competition to find the best design. When the competition closed, over fifty designs were submitted. Finally, in 1884 Sir Horace Jones, the City Architect, and John Wolfe Barry proposed the winning design. The Tower Bridge that stands today reflects their design. With the help of five contractors and 432 construction workers, it took eight years to build the Tower Bridge. The two piers were built to support the construction, and over 11,000 tons of steel make up the framework for the Tower.

We had such a cool time seeing the Tower Bridge and learning about its history. I  would highly recommend checking it out if you’re traveling through the metropolitan area in London, England. Thanks for joining me on this wild ride! Stay tuned for more adventures to come.